A mindmap was created to gather high level information about the protocol and the use cases, feel free to have a look: https://mm.tt/991002501?t=R1iofDilV0​

There are 3 types of smart contracts within the Request Network:

Actions, States and Properties of a request

A request has these Properties:

A request can be in one of these States:

A request supports these Actions:

All of these Actions can be done by specific parties at specific States. 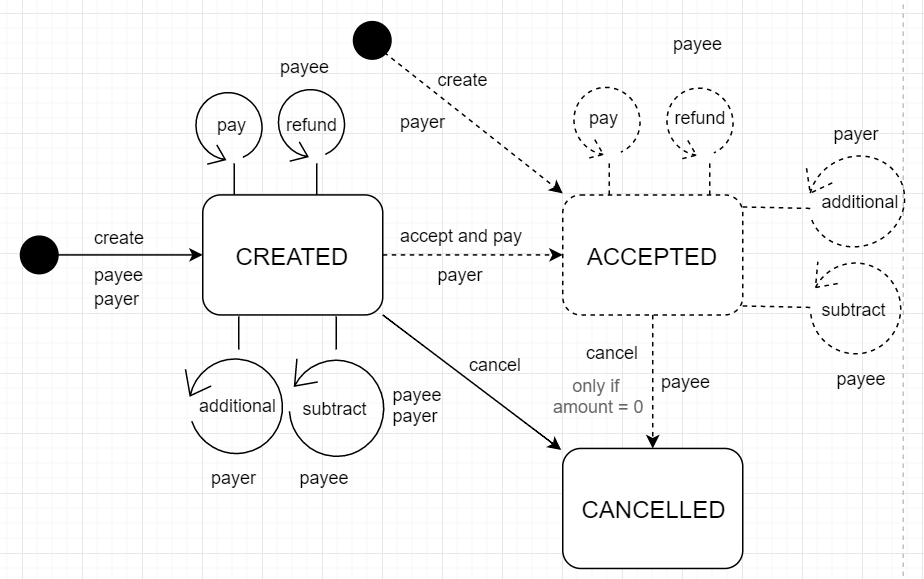 When the payer cancels a request, it is assimilated to a declined invoice. We will use this notion for the reputation system. In addition to the 3 states stored in the blockchain, applications can derive more information about the flow from the properies of a request. A request with a balance equal to the expected amount is considered complete and a Request with a partial payment can be considered in progress.

ECDSA Request: how to sign a request and let the user broadcast it (for online payments, Points of Sale...)

Request can handle every flow of money from a point A to a point B.

Each type of financial flow implies different metadata are stored in the request. For example:

The metadata formats will be developed over time and the Request default app interface will display most of them.

More information can be read on this blog update​

The Request Network Foundation Team will release a first format for invoices metadata during Q1 2018.

A mechanism to specify several recipients will be implemented inside the request which will allow developers to add a fee when someone creates a request through their application.

Documentation for onchain cross currency will be released when implemented.

With the multiplication of currencies and tokens, people will often be asked to pay in a currency they do not own. To pay a request without owning tokens of the requested currency, there are 2 solutions:

Both options are interesting depending on the context and users, developers and wallets will be empowered to choose the solution filling their need the best.

Separation of ID and wallet

In the blockchain world, an address can take on different meanings. The distinction between ID and wallet address is becoming clearer and clearer, notably when looking at EIP725 and EIP735.

In Request, a payer can receive requests sent to his ID and is able to pay with another address.

The register allows the payer to verify who is asking the money and allows accounting and auditing systems to be automated.

The network is registration agnostic. Anyone can create a registration system on top of the Request protocol and the applications can choose which one to refer to.

The Request Network Foundation Team will work on the support of one registration system.

At the moment, 3 main systems are developing their standards : Civic, uPort and the EIP725. As a reminder of the experience provided by these services, Civic was used by 0x during their token sale and you can experience uPort on the Olympia release of the Gnosis project.

We prefer using EIP725 as it aims to be decentralized and non-profit.

​EIP725 ensures anonymity by allowing one person to create a claim to verify the identity of the user (EIP735).

Request Network is not bound to the current limitations of the financial system and aims to tackle the reality of payments best. When you pay somewhere today, your money is split between different payees. We usually count at least 3 payees: the seller, the payment provider, and the government (for taxes). In many cases, this results in having some parties incur a debt with another one at the moment of payment (company debt to tax office for example).

Request allows to split the funds right at the moment of payment. Instead of having a unique payee, Request manages an array of payees.

To manage an array of payees, the smart contracts also manages an array of balances and expected amounts per payee. The main payee can do all the actions while the other ones are just observers. Except when it comes to the refund: any payee can refund their own part of the invoice from their ID address or their wallet address.

Documentation for reputation will be released when implemented.

Reputation is used to help users against phishing and save providers from bad payers.

The network is reputation agnostic. Anyone can create a reputation system on top of the protocol and the applications can choose which one to refer to.

The Request Network Foundation Team is going to support one and make it evolve in the future.

As in every reputation system, it is hard to detect the bad actors which are rating themselves with fake accounts. However circles can be detected, more reputation can be given by those who already have a good reputation and bad reputation can act retroactively to the previous ratings.